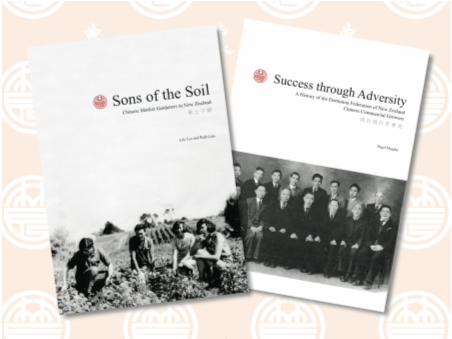 Sons of the Soil: Chinese Market Gardeners in New Zealand is a 550-page, lavishly illustrated social and community history of more than 140 years of Chinese involvement producing the nation's vegetables.

The first Chinese market gardeners arrived with very little to make a home and a life on the land. They worked onerous hours in all weathers to make a place for themselves and their families. It would be a rare local New Zealand Chinese family that did not have a link with a market garden.

Authors Lily Lee and Ruth Lam travelled to the major market gardening regions to research and interview market gardeners to capture for the first time their stories in their own words.

The authors trace the beginnings of an often over-looked agricultural story, and recount the social and community stories that have never been told.

At the peak in the 1960s, Chinese market gardeners produced 80 per cent of the country's greenleaf vegetables. Sons of the Soil recounts the growth to a peak of 623 gardens and the decline that sees only 149 gardens in the present day.

The Chinese market gardeners have faced vast economic and social change, yet throughout have maintained a shared sense of camaraderie.

Success through Adversity: A History of the Dominion Federation of New Zealand Chinese Commercial Growers, authored by Nigel Murphy, is a 168-page story of service and dedication.

Founded in 1943 and run by men who gave of their time and effort on behalf of their fellow growers, the Dominion Federation of New Zealand Chinese Commercial Growers has steadfastly upheld the rights of Chinese market gardeners for nearly 70 years.

Success through Adversity relates the history of the Federation including its formation, its relationship with other growers' organisations, the challenges it has faced and its achievements. It is invaluable reading for anyone interested in knowing how the Federation succeeded in bringing the organisation into the twenty-first century.

Of particular interest to readers will be the list of over 1500 growers, from the 1930s to the 2010s, in the major Chinese market gardening communities around New Zealand.

The two books are sold out

Lily Lee (Ho Li Li) born in Auckland in 1940 is a second generation Chinese New Zealander. Her mother and sister arrived as war refugees. Lily grew up on a market garden in Mangere during the late 1940s to 1960s. Lily graduated in Geography from Auckland University in 1961. She taught in primary and secondary schools for a number of years before joining the Ministry of Education as a Liaison Officer in 1989. She spent 17 years working in the school sector before retiring in 2005. In 2008 to 2010 she was invited to work with Asian communities for the Ministry of Social Development. In 1963, Lily visited her parent’s village of Gum Kei, Zhong Shan and gained a better appreciation of her culture, language and heritage. Over the years she has returned a number of times to China documenting her family history.

Ruth Lam, born in 1956, is a third generation Chinese New Zealander of Jung Seng descent. She is married to Alex (Pak Hung) who for many years has been market gardening successfully at Pukekawa. Ruth often assisted in the garden while bringing up their family of four children. Ruth has also been involved with local community groups including the Plunket Society and the Pukekawa School PTA. She co-edited the 1995 Pukekawa School Centenary book. In 1998, Ruth completed a Master of Arts degree in Education, with Honours from the University of Auckland. She then worked at the University on research projects to improve children’s reading. In recent years Ruth worked for the Franklin District Library Trust as a Customer Services Manager. It was during her time at the library that Ruth developed an interest in the history of Chinese market gardening in the Pukekohe district. Through this project, Ruth has enjoyed using her research skills to contribute to the preservation of the history of Chinese New Zealanders.

Nigel Murphy is a sixth generation New Zealander of Irish-German-English descent. He was born in 1958. He holds a Master degree in History. He has studied Chinese New Zealand history for over 25 years and has been involved in the Chinese New Zealand community as secretary of the Wellington Chinese Association and chair of the Wellington Chinese Language School.  His publications include ‘The Poll Tax in New Zealand: a research report’ which was published in 1993 and 2003, and a 'Guide to Laws and Policies relating to the Chinese in New Zealand 1871-1997' which was published in 2008. He co-authored the 2005 ‘Aliens at My Table: Asians as New Zealander see them’ with Manying Ip. He also contributed chapters to 'Unfolding history, emerging identity: the Chinese in New Zealand' and 'Dragon and the Taniwha: Maori and Chinese in New Zealand' published in 2009. He was a research librarian at the Alexander Turnbull Library for 25 years. In 2002 he was seconded to the Office of Ethnic Affairs as a researcher and historian to support the Chinese poll tax apology reconciliation process. Between 2007 and 2010 he was an historian with the Waitangi Tribunal.

In 1867, just one year after the first group of Chinese goldminers arrived in Otago, the first Chinese market garden was established in New Zealand. Since then Chinese New Zealanders have formed the backbone of New Zealand’s vegetable-growing industry. Chinese growers were, and still are, an integral part of the market gardening industry in New Zealand. Their history provides multi-faceted insights into a range of social, political and community changes spanning 140 years.

Early history
The first Chinese gardens were set up in the gold-mining areas of Dunedin and Alexandra. The small gardens produced vegetables for local settlements and provided a steady source of income. For those who found gold mining too much of a gamble it was an attractive business and increasing numbers of Chinese turned to market gardening. Soon Chinese market gardens were sprouting in other centres of New Zealand. By 1871 there were six Chinese gardens in Wellington. All were situated in what is now central Wellington: The Terrace, Central Park and Ohiro Rd. Auckland’s earliest Chinese gardens were set up in the 1870s in places like Carlaw Park, Khyber Pass, One Tree Hill, Mt Eden and Mt Roskill.

The urban centres came to depend on Chinese growers’ produce. In 1896MP for Wellington John Duthie commented that

"In Wellington we are almost solely dependant upon them for vegetables, and but for these industrious Chinamen the people would generally go short. It is all very well for certain growers to want the Chinamen sent away; but the price of vegetables is even now very high in town. The Chinese do not undersell. It is very desirable for the health of the population that people should be able to get a full supply of vegetables." (NZPD 1896 vol 92, p.254)

Growers also moved to rural areas. By the early twentieth century Chinese market gardens were established in every district in New Zealand. Not only were the majority of Chinese New Zealanders involved in market gardening – just under 50 per cent up to World War II – they also dominated the green leaf sector of the vegetable-growing industry in New Zealand.

WWII and the Dominion Federation of New Zealand Chinese Growers
The war brought many changes to the industry. Fresh vegetables were required in huge quantity, not only for New Zealand troops, but after 1942 for American forces as well. At the time Chinese grew 60-80 per cent of New Zealand’s green vegetables. The situation led to the formation of the Dominion Federation of New Zealand Chinese Commercial Growers. The organisation was set up at the suggestion of Prime Minister Peter Fraser so that Government could negotiate supply with a single Chinese group rather than multiple individuals. The Federation’s aims were to liaise with Government, protect the rights of Chinese growers, unite their efforts, and increase their knowledge of market gardening practices.

The war also brought significant change to the Chinese growers’ community. Between 1926 and 1939 the Government had closed the doors to Chinese immigration, leaving many Chinese men separated from their families in China. In 1939 the Government allowed the wives and dependant children of Chinese men to come to New Zealand as war refugees. They were eventually allowed to stay permanently. Many Chinese growers took the opportunity to bring their families to join them in New Zealand. The growers’ world was transformed from a community of men, to a community of families.

The 1950s-80s: business and community
The post-war years were good for growers. With the arrival of the wives and children, there was a real sense that New Zealand had truly become ‘home’, and growers made every effort to give their younger children the educational opportunities that they themselves never had. There was also an economic boom. The growers’ community, aided by the efforts of their families, consolidated their position in the industry. A 1960 Federation submission to the Minister of Agriculture stated that “Chinese growers cultivate more than 7,000 acres out of a total of 12,000 acres affected by the Market Section of the Vegetable Levy Act 1957”. According to the submission they also sold 75 per cent of vegetables sold at auction.

But as well as industry and business functions the Growers’ Federation also had cultural responsibilities to a rapidly growing community. During the 1950s and 1960s the Federation became one of the main Chinese community organisations in New Zealand. Its journal, the NZ Chinese Growers Monthly journal, was the longest-running Chinese language publication in New Zealand, running from 1949-1972. The aim of the journal was to serve as a link between the Federation and the growers, and to strengthen not only the interests of the growers, but of all Chinese New Zealanders. The journal was read by practically everyone in the community.

1980s onwards: A changing world
The growth of supermarkets and the decline the auction system caused a fundamental change to the growers’ world. Increasingly supermarkets were able to determine produce prices with their bulk-buying capacity. For the small family-run gardens that comprised the bulk of the Chinese growers’ community business became less profitable. In addition the aim of giving the younger generations better opportunities in life worked all too well. Many took jobs in the city, and few were willing to take over the family business. Gardens have begun to be taken over by a new wave of Chinese migrants, who arrived when the Government changed immigration regulations in the mid 1980s.